We Don’t Know What It Is, But Here’s Antibiotics 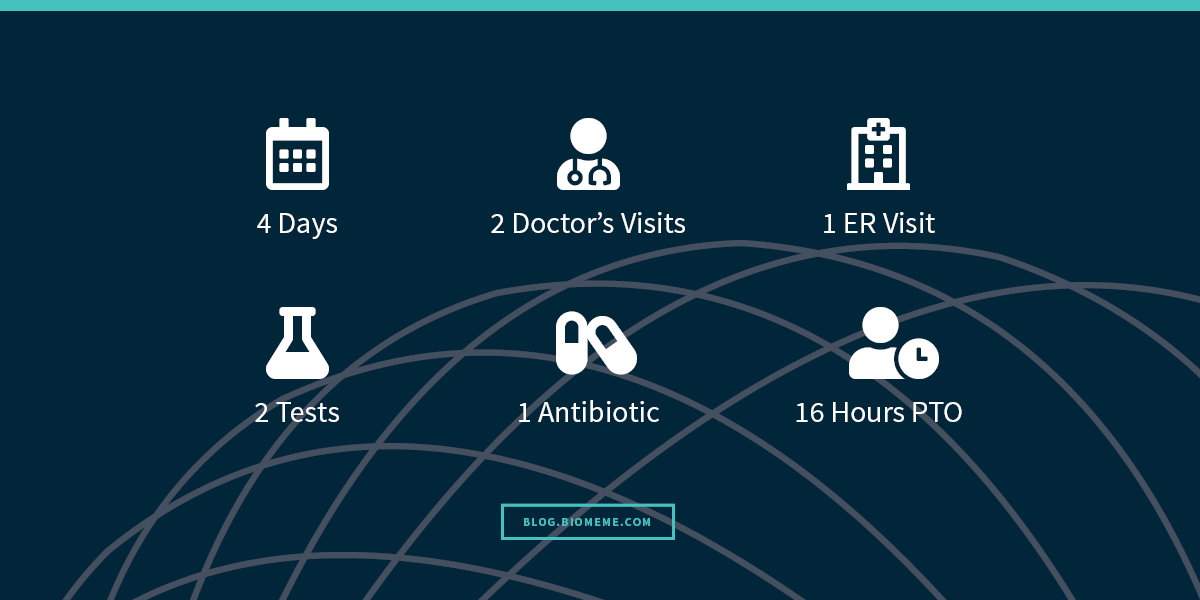 My wife and I are blessed with our awesome 11-month-old son named Cameron. 95% of the time Cameron is a very happy baby, always smiling and laughing. He loves throwing his toys around the house, chasing his puppy Springsteen, watching Mickey Mouse Clubhouse, dancing to the Hot Dog song (not annoying at all), and apparently sipping water through a straw... Earlier this week, he started coming down with a cold. Cameron was showing typical symptoms: runny nose, light coughing, sneezing, etc. A day or so went by and his condition seemed to be progressing, so we decided to take him to his pediatrician. Cameron has had bad luck with ear infections; so much so that he’s scheduled to get tubes late next week, so we thought it could just be another one of those.

Nope, ears were fine. Lungs were alright, too. We left the doctor’s office and were instructed to treat his symptoms like we’d treat any other cold. We jacked up the humidifier, gave him Tylenol as needed, sucked his nose, put some Vicks rub on his chest, snuggled him to death, and when the next day came around, off to daycare he went. It’s just a cold, right?

A few hours after dropping him off, my wife received a call from daycare letting her know that Cameron had been fussy all morning, needed constant holding, and was now running a 103 degree fever. Welp, that’s not good. So, my wife called his pediatrician, scheduled another appointment for that afternoon, left work, scooped Cam up from daycare, gave him some Tylenol for his fever, and headed back to the doctor.

Cameron was checked for similar things to the day before, but this time, he’s given a flu test. Although not impossible, I’d be pretty surprised if he tested positive for the flu considering he’s up to date on his shots. The results came back negative. Phew, it’s not the flu, so what is it?

We Don't Know But Take These Antibiotics Just In Case

His doctor is understandably limited in what she can test for, but she’s seen Cam enough to know he isn’t himself. After repeatedly checking his oxygen, breathing, and lungs, she reassured my wife that it was just a bad cold. She sent them on their way and prescribed Cefdinir, used to treat a wide variety of bacterial infections.

Does he have a bacterial infection? Is it a virus? Is it neither? Who knows. One thing I do know, however, is the last thing I want to do is give this poor kid another round of antibiotics considering the amount he’s taken over the last 11 months because of those 6 ear infections.

Another restless night goes by and Cameron continues to trend in the wrong direction. Cough is terrible and wet, wheezing has begun, and his fever persists. The mucus, oh my, so much mucus! We could have gone back to the doctor for the third time, but we opted for the Emergency Room instead. Don’t get me wrong, we love Cam’s pediatrician, but there’s only so much they can do.

So my wife and I bundle Cam up, drive to the ER, and wait about an hour until an exam room frees up. While Cameron’s assessed by the triage nurse, we agree he should be tested for respiratory syncytial virus (RSV). The nurse takes a quick nasal swab and sends us back into the waiting room (packed to the nines with sick patients because all beds are occupied). A few more hours pass, a bed opens up, and the results are in. Our son is once again negative for flu, but positive for RSV. We immediately begin a breathing treatment and let the doctor do his thing.

A diagnosis! We now have a diagnosis for Cameron and it isn’t pneumonia, to the relief of my wife. Unfortunately, there isn’t much we can do for RSV since it’s a pretty common respiratory virus that needs to run its course, but we can stop giving him antibiotics. Cameron should recover in a week or two but his ear tubes surgery is now postponed 4-6 weeks as a result of this ordeal. That said, not even RSV can stop him from groovin’ to some CCR... RSV can be serious, especially for infants and older adults. In fact, RSV is the most common cause of bronchiolitis and pneumonia in children younger than 1 year of age in the United States. It’s also a significant cause of respiratory illness in older adults.

I’m sure other parents with young children can relate to this experience and I look forward to the day RSV testing is generally available in all healthcare facilities so we can turn this 4-day adventure into a single doctor’s visit. I’m especially proud to be working for a company that develops assays to detect pathogens such as Influenza and RSV, albeit for research use only.

Additionally, our doctor’s inability to rapidly and reliably distinguish bacterial from viral or non-infectious etiologies is a major impediment to appropriate antibiotic use and she’s certainly not alone. Each year in the U.S., physicians unnecessarily write 47 million antibiotic prescriptions. Most of these unnecessary prescriptions are for respiratory conditions that are most commonly caused by viruses (including common colds, viral sore throats, and bronchitis) which do not respond to antibiotics. In fact, the CDC estimates at least 50% of antibiotic prescriptions for these acute respiratory conditions are unnecessary, contributing to increased healthcare costs, unnecessary drug-related adverse effects, and antimicrobial resistance.

Through our collaboration with Predigen, we’ve developed a host-gene expression-based test that accurately distinguishes bacterial from viral infection using rapid multiplex PCR. It’s too premature to quantify the impact this will have on public health, but I know our doctor’s office could use it, what about yours?

Note from Our CEO: Biomeme 10 Years in the Making

Celebrating a Decade at the Forefront of Molecular Detection: Biomeme’s 10th Anniversary