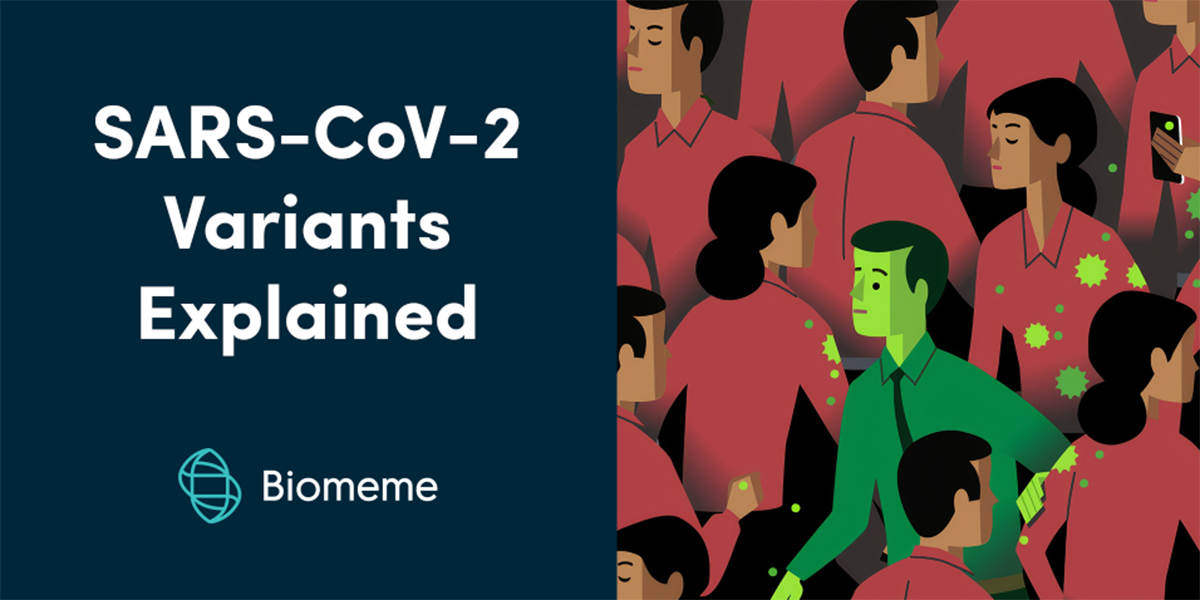 What is a variant?

Why are we just now hearing about variants of SARS-CoV-2?

What are the current emerging SARS-CoV-2 variants to know?

Should we be worried about these SARS-CoV-2 variants?

What do new SARS-CoV-2 variants mean for Biomeme testing accuracy and sensitivity?

What can be done to stay safe from the new SARS-CoV-2 variants?

What is a variant?

As an infected cell builds new viruses, it occasionally makes small errors when copying the RNA, called mutations. Scientists can track mutations as they are passed down through a lineage, which is a branch of the viral family tree.

A mutation is a genetic change; a variant is the same type of virus but with a specific set of mutations. If enough mutations occur in a lineage, then the function of the virus can change. These lineages come to be known as strains. COVID-19 is caused by a coronavirus strain known as SARS-CoV-2. Here is a breakdown of that viral family tree, including a second example using another familiar virus, Influenza (aka the Flu):

Why are we just now hearing about SARS-CoV-2 variants?

SARS-CoV-2 has been mutating all along. All viruses mutate and change. Media aside, this has recently become cause for concern as certain variants become dominant through their ability to infect cells better and spread faster. There’s still not enough information to know the variants’ full impact on disease severity or increased risk of death, but here’s what we do know...

As of January of 2021, the highly transmissible B.1.1.7 variant of SARS-CoV-2, which was first identified in the United Kingdom (U.K.), has gained a strong foothold across the world. The Centers for Disease Control and Prevention has warned that B.1.1.7 is projected to become the predominant source of all infections in the United States by March.

A new study states, “While B.1.1.7 is of current interest given the concerns regarding increased transmission dynamics, the results here reinforce the need for ongoing SARS-CoV-2 genomic surveillance to monitor the dynamics of B.1.1.7 and other emerging SARS-CoV-2 variants, including those yet to be discovered.”

The CDC, in collaboration with other public health agencies, is monitoring the situation closely.

What are the current emerging SARS-CoV-2 variants to know?

Scientists are working fast to identify and learn more about each variant that appears. These are often referred to by the locations where they were first discovered. The most developed variants that have been identified to date were discovered in the United Kingdom, South Africa, Brazil, and California.

There are more specific names for each variant:

All the letters can get confusing but once you know what to look for, you can better understand what it all means:

Coronavirus Disease of 2019 is the name of the disease caused by the SARS-CoV2 virus.

Severe Acute Respiratory Syndrome Coronavirus 2 is the name given by the International Committee on Taxonomy of Viruses on February 11, 2020. It was named SARS-CoV-2 because the virus is a genetic cousin of the coronavirus which caused the SARS outbreak in 2002 (SARS-CoV).

When UK scientists first discovered a new variant they named it VOC 202012/01, VOC (Variant of Concern) and the date it was found. The name B.1.1.7 for the same variant discovered in the UK comes from a classification system based on the evolutionary relationships of viruses. Another name for the same variant, 20I/501Y.V1, refers to the year it was found (20) and after a substitution in the 501st amino acid site of the virus’s spike protein (501Y).

As these variants are still new and popping up all over the world, scientists are still working on the correct standardized nomenclature. There is no one-size-fits-all approach for naming variants of SARS-CoV-2 but hopefully there soon will be.

Should we be worried about these SARS-CoV-2 variants?

The CDC lists these as the most concerning potential consequences of the emerging variants:

What do new SARS-CoV-2 variants mean for Biomeme testing accuracy and sensitivity?

As reported by the U.S. Food and Drug Administration (FDA) on January 8, 2021, genetic variants may lead to False Negative results with molecular diagnostic tests for detecting SARS-COV-2. However, the FDA also states tests that use multiple genetic targets are less likely to be impacted by the increased prevalence of variants and Biomeme’s SARS-CoV-2 test falls into this bucket.

Unlike what we are seeing with many other tests on the market, the Biomeme test detects two different SARS-CoV-2 genes which decreases the likelihood of false negatives due to emerging variants. Our test is also conveniently multiplexed together with our RNA Process Control (RPC) to further monitor RNA extraction and RT-PCR. Each reaction well of each test already contains lyophilized master mix, enzymes, and multiplexed primer/probes for the following triplex reaction:

Biomeme recently confirmed, through in silico analysis of the genetic sequences, that our test detects all currently known variants of SARS-CoV-2. We are continuously monitoring and analyzing the sequence of emerging variants of concern and will update accordingly.

Right now, for example, our Biology team is hard at work on a new Variant ID Go-Strip™ to further identify the 4 main variants of concern mentioned above by characterizing 9 different gene targets within a positive sample, looking for key single point mutations and deletions common to certain variants. Our Franklin™ thermocycler will be able to run 3 Variant IDs per hour or over 30 with our 96-well Go-Plates on your standard lab-bound thermocycler.

While our ‘Variant ID Panel’ is still undergoing validation, the workflow would be as simple as:


What can be done to stay safe from the new SARS-CoV-2 variants?

The fewer people you’re around, the lower your chance of infection. When you stay home, you help stop the spread to others, as well.

Correct and consistent mask use is a critical step everyone can take to reduce their risk of getting and spreading COVID-19. How well a mask fits, how well it filters the air, and how many layers it has are all important to consider when choosing which mask to wear.

Make sure to wash your hands for at least 20 seconds and disinfect frequently to prevent spreading the virus.

Stay at a safe distance from others

Since people can spread the virus before they know they are sick, it is important to stay at least 6 feet away from others when possible, even if you—or they—do not have any symptoms. Social distancing is especially important for people who are at higher risk for severe illness from COVID-19.

At Biomeme, we know a thing or two about the importance of testing. If you find yourself experiencing symptoms or are exposed to someone who is, make sure to get tested for COVID-19.

Get vaccinated when possible

The combination of getting vaccinated and following CDC’s recommendations to protect yourself and others will offer the best protection from COVID-19. Vaccination schedules vary from location to location. Stay up to date on when you are eligible to receive yours.

Biomeme is also continually monitoring all emerging variant data and updating our own pages to keep our customers and community informed and protected.

Welcome to the New Biomeme HQ