The Wilds Turns to eDNA to Track Elusive Salamanders

Biomeme and a team from The Wilds have been featured in The Columbus Dispatch (dispatch.com), a daily newspaper based in Columbus, Ohio. The following is a short excerpt from the post, written by Alissa Widman Neese.

While water samples are mostly tested for eDNA in labs, it can be challenging when those labs are located far from the bodies of water being examined.

That’s the case for The Wilds, a 10,000-acre wildlife conservation center that the Columbus Zoo and Aquarium operates about 70 miles southeast of Columbus. Zoo staff members and other wildlife activists across Ohio have released hundreds of hand-reared hellbender salamanders into the state’s waterways since 2012, hoping to reintroduce the species in areas where human impact has reduced their populations to near-extinction.

But surveying past or potential release sites requires some planning, especially when time and heat can degrade DNA before it gets back to their lab.

The “two3” technology tested Wednesday could eliminate those obstacles. Biomeme, a Philadelphia-based company, makes the device, a one-pound box that attaches to a smartphone, which acts as an interface to run the test and send results to a digital storage cloud. 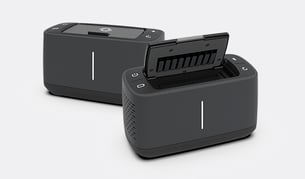