Biomeme and Osmosis discuss COVID-19 Testing on Raise the Line 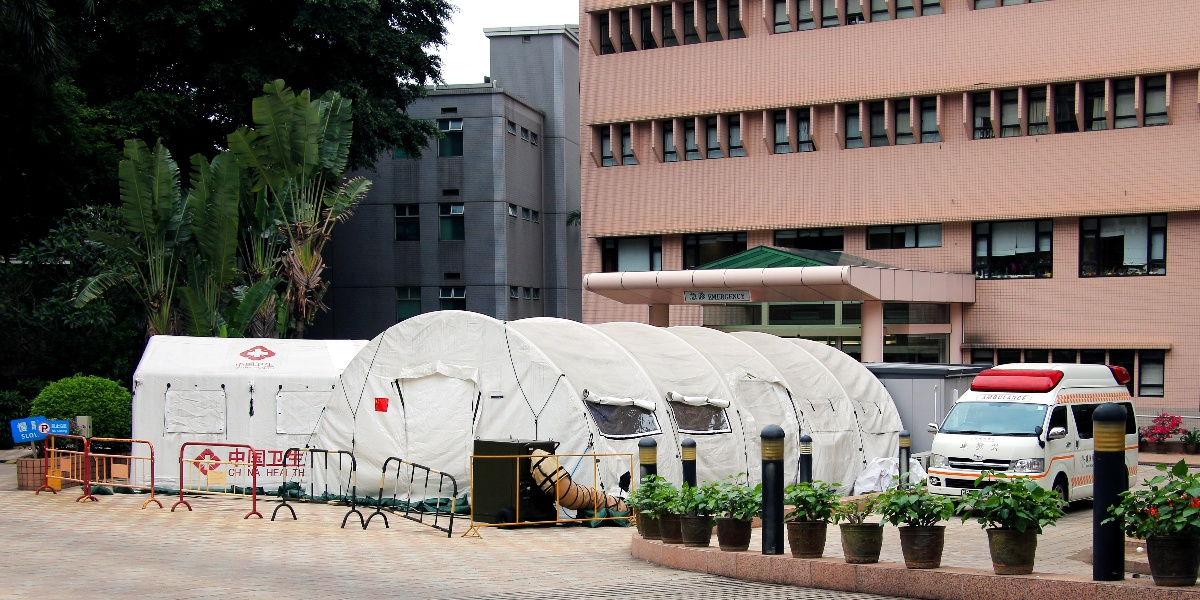 As the United States rolls into month two of Stay at Home and social distancing orders, ramping up COVID-19 testing is a critical step to track and prevent the spread of the SARS-CoV-2 virus to eventually loosen those restrictions. Jesse vanWestrienen, Biomeme co-founder and biology lead, recently spoke with Dr. Rishi Desai at Osmosis about Biomeme’s field-friendly, portable test and the impact it can have on the COVID-19 pandemic.

Listen to Jesse’s episode of Raise the Line here:

RISHI DESAI: Hey guys, I'm Dr. Rishi Desai, the Chief Medical Officer here at Osmosis. And today I have the pleasure of being with Jesse vanWestrienen who is the Co-founder of Biomeme and leads their biology team. Jesse is a molecular biologist with a virology background, specifically, and worked on COV-1 before COV-2 ever was known to the world. So Jesse, thank you for being with us here today. Such a pleasure to have you.

Jesse vanWestrienen: Hey, thank you for giving us the opportunity to visit with you today.

RISHI DESAI: Jesse, can you get into Biomeme: the role of the company, what you guys do, and also, how this test works and where it might work?

Jesse vanWestrienen: Sure. So at Biomeme we develop a series of tools that allows anyone to isolate nucleic acids or DNA. We design tests to detect DNA from those samples. We make hardware that allows anyone to amplify that DNA, and our hardware systems communicate off of a smartphone app. So, what Biomeme is about is enabling anybody anywhere to detect DNA, in short. And really what it's about is providing information from DNA, so that stakeholders can use that information in the case of a diagnostic for human health that can guide treatment options…

Biomeme, we've been around for about seven years, and we had a variety of different use cases we've been working on before this COVID-19 outbreak. A lot of the customers that we had are anyone from the U.S. government who is looking at environmental surveillance, we have a wide variety of researchers that do field work where they want to detect DNA in the field. We've been working with some industry partners around manufacturing and industrial quality control. So, it really runs the gamut of use cases and industries. And there's many more applications that are like that. Since the COVID-19 outbreak, however, we've been inundated with requests for people looking for testing solutions, and that includes the U.S. government and hospital systems and others. And so really, it's going to be our main focus for the next, I'd say, three to six months as we work to scale our manufacturing to provide those testing solutions.

RISHI DESAI: What are the big advantages that this process has over other current testing options?

Jesse vanWestrienen: I'd say the biggest advantage is it's distributed and fast. Everything's really the size of the palm of your hand. It can be carried anywhere. It has an internal battery, so it can perform around six tests per battery charge. The consumables are also very user friendly—don't require any extra lab equipment. So you really can perform these molecular-grade lab standard tests very quickly.

RISHI DESAI: Do you mind saying how quickly? How long did it take for one sample, let's say, to get processed?

Jesse vanWestrienen: For one sample...so, the sample prep process takes a couple of minutes, loading the test, another couple of minutes, and then about 45 minutes for the thermocycler to run. So, all in all, you're getting a sample done in about one hour. If you wanted to run multiple samples, it would add an additional 15 to 20 minutes on that.

RISHI DESAI: Can you speak to the sensitivity and specificity of the test and how it might differ from other tests that are out there at the moment for RT-PCR?

Jesse vanWestrienen: We were able to get our products to a group in New York called Northwell Health. They're one of the largest hospital providers in New York. One of their lab directors and their team who do a lot of the lab testing had reached out looking for those distributed diagnostics. They did an initial evaluation with our end-to-end test against samples that had already been either determined positive or negative with other FDA EUA methods. And we found a 98% sensitivity, so we missed where there was one discordant result out of—I believe—it was 42. So we're pretty, very pleased with that. It seems that it'll match most of the other EUA systems that are out there. I know that's a sort of small study for now, but it's with actual COVID-19 samples from NP swabs. So it was a very good demonstration of capability.

RISHI DESAI: Do you mind getting into how you're able to get this out there so quickly? I mean...humanity has only known COVID-19 for a handful of months. How did your team work so fast?

Jesse vanWestrienen: Yeah, we were able to work really fast. It's what we do at Biomeme, is assay development. So we have a lot of experience doing that. And when we started seeing news coming out of China of this new coronavirus and the extreme measures they were taking, we sort of thought we would jump the gun a little bit and start development of a test as an insurance policy, if you will. And so we really started our test development in late January. Within a couple of weeks, we were able to receive back the tests that were designed to do wet validation and verification on them. Once we optimized them, we were able to manufacture them pretty quickly. And then, we really spent the last month working on verification and validation for an FDA EUA submission. So, it really is incredible these days how quickly you can work with DNA from sequence to a product. It's sort of unprecedented. And it's one of the reasons that I think this pandemic, hopefully, will turn out a little differently than something like the 1918 Spanish flu or others where people just didn't have these types of tools.

RISHI DESAI: Jesse, can you get a little bit into where these devices and products would be best fit? Where are they going to be used in terms of things like homes or clinics or hospitals in the U.S. or abroad? Any of those kinds of topics?

Jesse vanWestrienen:  So that really depends on the application or the use case. For research, or research use as well as some of these other applications I mentioned, like industrial quality control, the tests are performed really anywhere. They can be onsite, the back of a truck, a small sort of work office, or a small lab. When it comes to the COVID-19 or the SARS COV-2 tests that we developed, the initial FDA EUA will be for use in moderate to complex CLIA facilities. So… you could think of that as central labs within hospitals, that sort of thing. We also hope to be generating some end-to-end test data of farther forward or distributed test settings. So small pop-up test sites. You can think of like, you've seen: the drive-thru collection sites. We see no reason that people couldn't be using our products right there on site to provide a fast turnaround.

RISHI DESAI: You said it can be done anywhere, including the back of a truck. That's a pretty powerful visual. Who can do the test? So for example, do you need certain training? Can a patient do it themselves? Do you need to be a clinician, or do you need to have some sort of lab credential to be able to pull this off?

Jesse vanWestrienen: I would say that really anybody with training can do that. I feel confident that I can demonstrate to a user and get them comfortable with the procedure. And then practice helps, right? So after a few times of them doing it, it really is pretty simple. In terms of the COVID-19 testing, I'd see the first users being people with a little more experience. So this could be lab technicians, medical technicians, nurses—those sorts of users. It's really not in a place or approved for home use yet. So you won't see the initial products in the home. But one day, that's where we want to go. And that will be even more powerful when we get there.

RISHI DESAI: If this does get government approval—which, you know, obviously everyone is kind of collectively hoping more and more tests are available in the market like this one—how quickly can you ramp up production of this?

Jesse vanWestrienen: So if we get FDA EUA approval, we've been working to ramp our manufacturing and scale so that we can deliver as many tests as possible where they're needed. To do that, we've already initiated a manufacturing of a second assembly line of our sample prep products, and we've been working with our manufacturers on the freeze drying side to also scale that. I think that that work will be done in probably one to two months to really get to that sufficient scale where we hope to be able to supply thousands of these tests weekly.

RISHI DESAI: Can you speak just briefly to the role of testing in general? How important it is to fight COVID-19?

Jesse vanWestrienen: I think testing is critical to fight COVID-19. I think that the lack of testing early on really caused a lot of problems. People didn't know where the virus was, how much of what there was, and it really has led to an acceleration in the number of cases. You look at places like South Korea that implemented very good testing very early on,  they've been able to flatten the curve better than we have so far. And so, I think going forward as we slowly thaw from the extreme social distancing and current lockdown measures, I think that testing will be critical to keeping the virus at bay, really understanding where it's at, who has it, and most importantly, track and trace individuals that may have been exposed—test them such that you can isolate. And I think that'll be how the world will slowly try to get back to some normalcy from here.

Jesse vanWestrienen: Oh, man. Keep doing what you're doing. You're critical. I think one of the best things that's come out of this is people really realizing and appreciating the healthcare workers out there who are working their butts off to make sure that as many of us stay healthy. And so, I hope that that's one of the long-term, lasting things that will come out of this whole mess, is a better appreciation for not only healthcare workers but public health in general.

RISHI DESAI: And then, more broadly, what do you think can or should be done overall to "raise the line"? In other words, to expand the capacity of our healthcare system?

Jesse vanWestrienen: I mean, that's a tough one. I think that in our case, testing is critical. Not only in companies like ourselves, but there's many, many others out there that are all working to provide as many testing solutions as we can. And it's going to take the combined approach of really everyone in the entire industry to do that. I guess from my perspective, being more immersed on the testing side of things, that's where I see how we can help.

RISHI DESAI: Jesse, it's been a pleasure chatting with you. I'm pretty impressed with what bio means doing. I think our audience is going to be pretty wild by what you just had to say. Thanks for doing it.

Jesse vanWestrienen: Thanks, Rishi and the Osmosis team. It was a pleasure speaking with you.